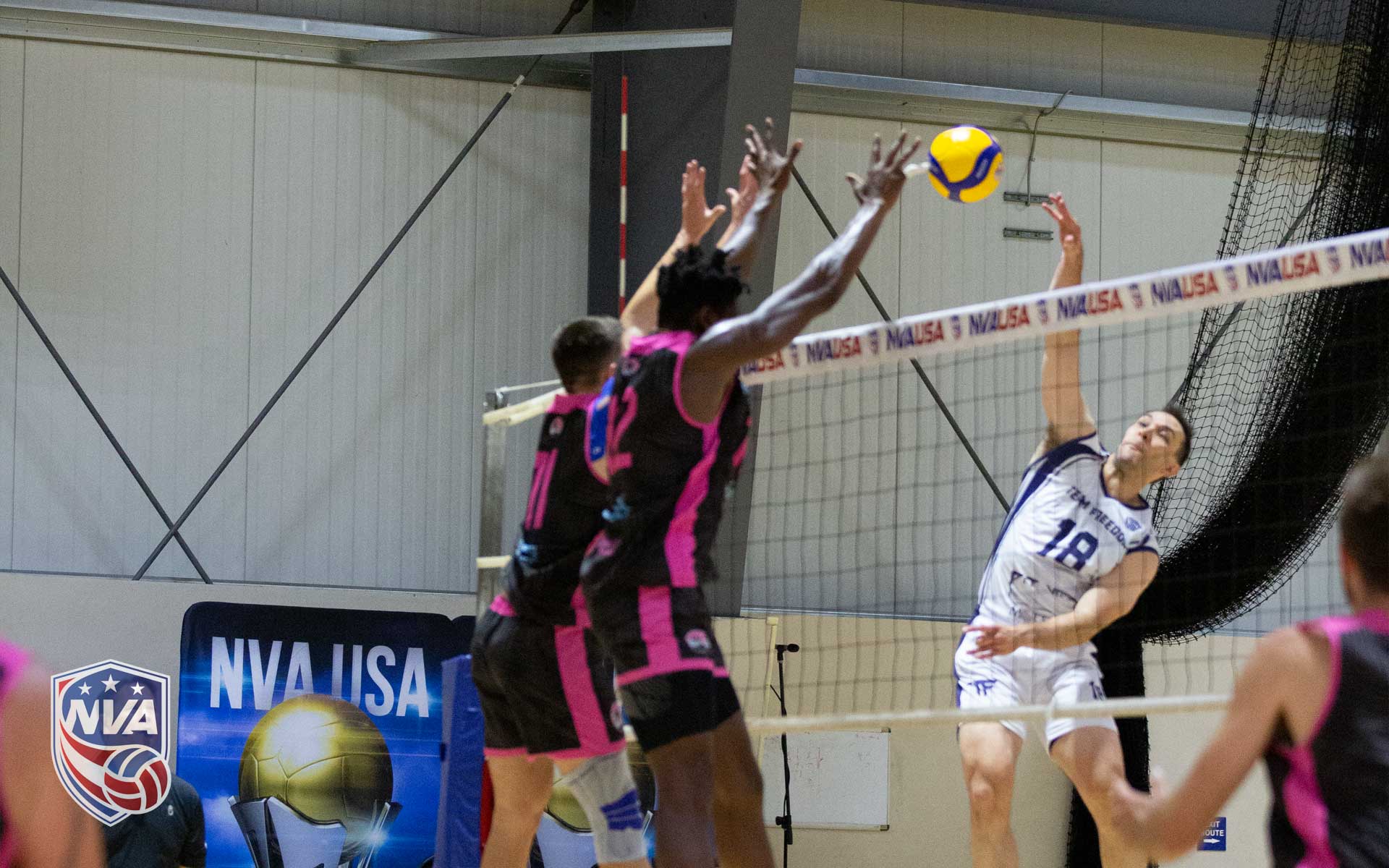 Southern Exposure dominated set number three that started with a 5-0 run from two Team Freedom hitting errors and kills by Mercado and #8 middle blocker Tim Lourich and block by Lourich. At 9-4 Southern Exposure increased their lead to 7 points at the media timeout with a combination of Team Freedom hitting errors and kills by Seifert, Dzema, Arsiani and Mercado for a 16-9 lead. The only offense Teams Freedom mustered was from Lutz who had 5 consecutive kills. For the rest of the set the only other scores for Team Freedom came on kills by #2 Jake Rosner, Dzema and Nelson. Southern Exposure closed out the set with two consecutive service aces by Rocklein, one kill and one service ace by Ofoha. The set ended on a service error by Team Freedom at 25-15.

Southern Exposure Defeat the Stingers in a 5 Set Marathon

Without a doubt this match between the Stingers was the most competitive and longest of the 2021 NVA season. It also established two NVA records that may took a long time to break or never surpass. The match unofficially lasted 2 hours, 54 minutes and 47 seconds and all five sets went into overtime.

Another interesting aspect of this marathon battle was that it matched up last year’s NVA Champions the Stingers against Southern Exposure, a team who did not win one match last year.

Stingers and Southern Exposure entertained the volleyball fans with some spectacular and crazy plays and rallies; a line-up rarely seen in volleyball when the Stingers played set number four with Jake Langlois in the middle blocker position and stayed on the back row in the fourth set; and a very rare ineligible substitution that resulted in a red card penalty for a delay of game at a crucial point with the score tied 27-27, which also occurred in the fourth set.

At 21-17 the Stingers fought back to tie and take the lead and scored 5 consecutive points on 2 kills by Langlois, one kill and block by Menica and one kill by Storm to 22-21. While both teams battled into overtime, Stingers kept their 1-point lead until 27-27, when the chair umpire penalized Southern Exposure for a delay of game caused by an ineligible substitution. Because Southern Exposure received a yellow card earlier in the match, this delay of game penalty was a second infraction, which resulted in a red card and change of ball ownership that gave the Stingers’ a point to 28-27. On the next point the Stingers won the set on a Southern Exposure error 30-28.

Southern Exposures’ Tyler Hubbard-Neil led all players with 21 kills. His teammates Evan McDonough had 13 kills and Lourich and Payne each had 12 kills.

previous
Full Recap of Southern Exposure in Atlantic City
next
Tyler Hubbard-Neil is Following His Destiny As He Enters the NVA Finals
PRIVACY POLICY
TERMS & COND...