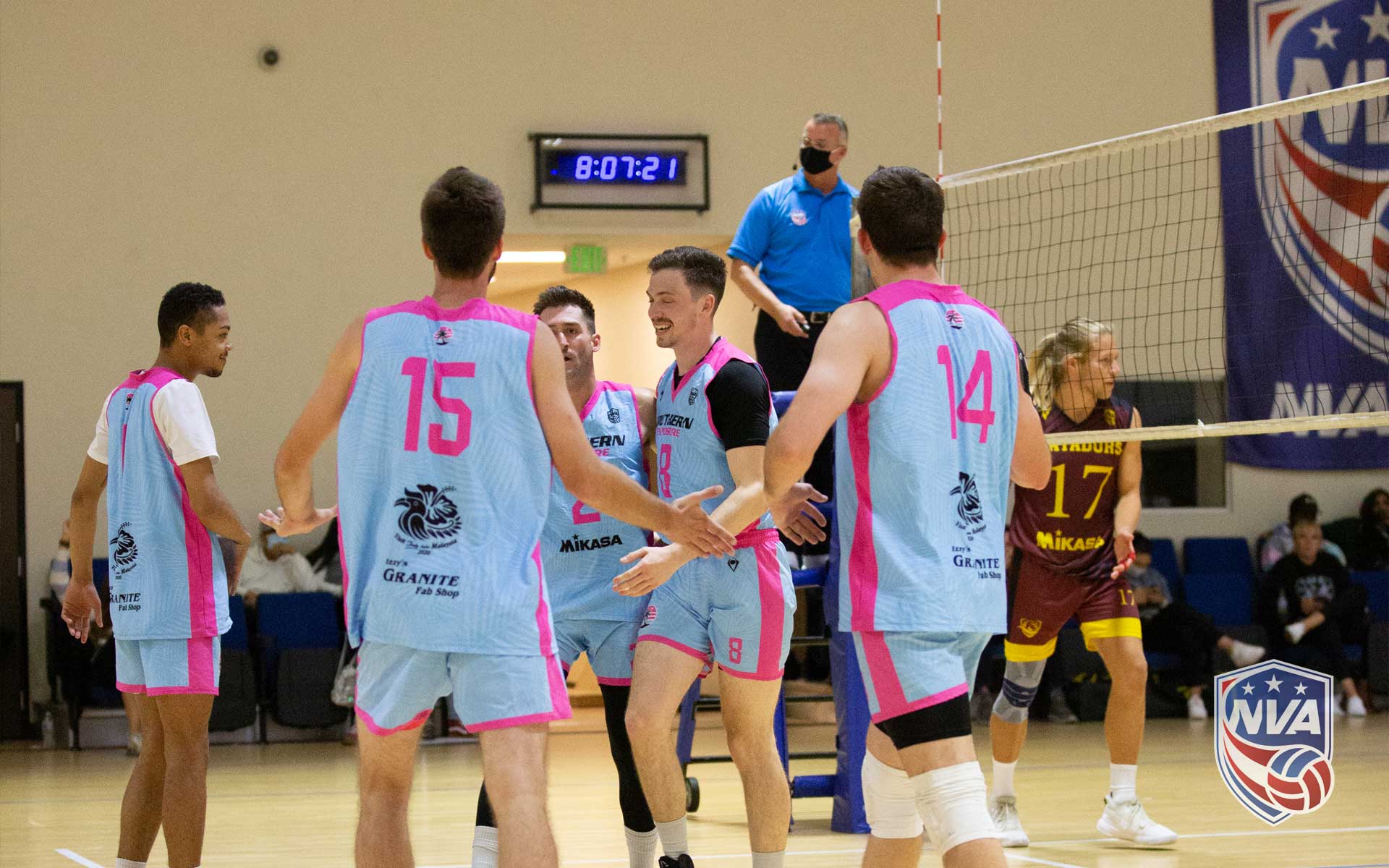 Stunners had to make a last minute lineup change because their starting Libero, Jake Hurwitz, had to work. The Stunners assigned OH Matt Hilling to play Libero and inserted rookie OH Antonio Aguizola to play OH. Despite their best efforts the new lineup didn’t fare well for the Stunners in the first two sets. In the third set Hilling and Aguizola changed positions. But like the first two sets the Stunners never got into a good offensive rhythm, which resulted in many hitting errors and gave Southern Exposure free points.

Stunners made several valiant efforts in each set to launch a rally but each time late in the sets they fell short due to hitting errors. OPP Jair Sanchez Santiago had a leading 16 kills, Joey Jarvis 8 kills and middle blockers Nick Amado and Kevin Gear each had 2 kills. Hilling had two kills but they came in the third set. Overall the Stunners hit a dismal 36%.

Southern Exposure was led by a well balanced offense. Setter Derek Sullivan utilized all his attackers. OH Kevin Rocklein led the team with 8 kills and OH Jakeb Ciesla, and MB Payne Langston each had 5 kills. And Sullivan also had 5 kills. Southern Exposures’ blocks, which occurred at crucial points late in the sets also helped in their win. Southern Exposure had a total of nine blocks,  Ciesla with 4, Rocklein 3, Girshfeld and Langston 1. Although Southern Exposure’s hitting percentage was less than the Stunners at 36%, they scored points and sided out at pivotal moments in the match that hampered the Stunners ability to make a comeback. And the Stunners didn’t help their cause with a multitude of hitting and service errors. All three sets won by Southern Exposure ended on Stunners’ hitting errors. The final scores were 25-23, 25-20 and 25-22.

After the Ramblers near flawless play on Friday, they made some major changes to their starting line up against Southern Exposure. Steve Duhoux replaced Michael Keegan at setter, Max Osmundson for Ryan Schickling, Kyle Radecki for Ryan Mather and Mark Lane for Josh Duarte. Southern Exposure made no changes.

Both teams sided out well to start the match. Most of Southern Exposures’ points came from Tyler Neil-Hubbard, who also had a block. Ramblers’ Kyle Radecki supplied the points for Ramblers, who took the early lead at 8-7. At 11-11 Southern Exposure started a mini-run that began with back-to-back kills by Jakub Ciesla took a three point lead at 19-16. But the Ramblers’ depth on the bench played a big part in launching a comeback. Ramblers substituted Mather for Radecki and Keegan for Duhoux. Ramblers took back the lead from a combination of Southern Exposure hitting errors and kills by Mathers and Brandon Rattray to 21-20. Ramblers closed the set with a Rattray kill, MB Mark Lane and Keegan block  pulled for the win at 26-24.

Ramblers kept Mather and Keegan in the lineup for the third set, which paid off for them because they took an early four point lead with kills by Mather, Rattray, Lane and ace by Keegan. A run of errors kept Southern Exposure from launching a comeback and Ramblers increased their lead with a run of kills by Rattray, Lane, Mather and Max Osmundson to 20-11. Southern Exposure attempted a rally with a short run from kills by Payne, Hubbard ace and Lourich block and Lev Girshfeld kill to 22-17 but Ramblers sided-out well and closed the set with a Mather kill to 25-17.

Rattray and Mather led all players with 20 kills and 14 kills respectively. Ramblers had a total of nine blocks from Mather (4) Rattray and Osmundson (2) and Radecki 1. Ramblers’ hit 46%.

The last NVA match of the weekend ended like it started with a five setter. Matadors started Mario Meza at Libero. While Matadors started with good play, Southern Exposure struggled to pass the ball and also committed several hitting errors. Matadors also scored points on kills by Jesus Serrano and a Carlos Serrano service ace to lead 8-3. Although Southern Exposure finally cleaned up their play with dump kill by setter Derek Sullivan and kills by Tyler Neil-Hubbard and Jakub Ciesla, Matadors added another point to their lead on a kill by Jacob Vander Beek, two kills by C. Serrano and Martin Petris ace to 16-10. Southern Exposure chipped away at the lead with two kills and a block by Eddie Moushikhian and Tim Lourich block for a 16-14 score. But thanks to Southern Exposure’s hitting errors along with Matadors’ kills by J. Serrano, middle blocker Brett Massettti and Mauro Issac Matadors took the lead back and added to it to 23-19. A Southern Exposure hitting error and double trickle net service ace by Issac won the match for the Matadors 25-19.

Matadors finished the weekend with a record of 1-3 and Southern Exposure 2-1.