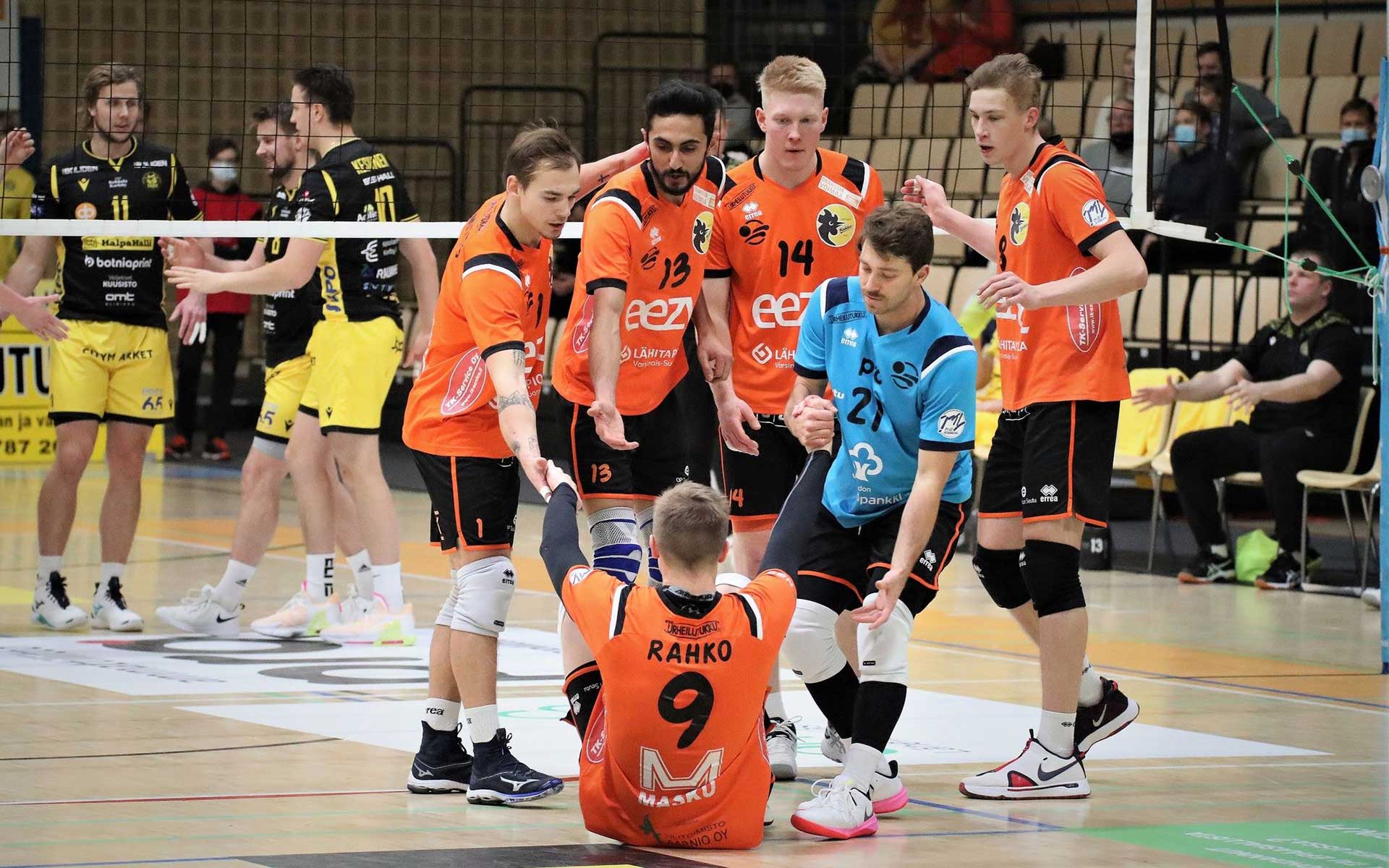 After catching a late flight in December to start his season abroad following a successful 2021 NVA campaign, Southern Exposure’s Kyle Dagostino is now in the thick of the season with his new team, Raision Liomu. The team is based in Raisio, Finland, just outside of Turku, located on the southwestern-most side of the country, and has competed in the Finnish Lentopallon Mestaruusliiga since 1958. They have snagged some of the U.S. ‘s top liberos for their roster throughout the last decade, including the Vegas Rambler’s Ryan Manoogian and National Team Libero Dustin Watten.

Kyle recently spoke over the phone to discuss his experiences this season after having played six matches for the team with a record of 6-4 since his arrival. Similar to his time this summer with the American National team during the pan am-cup, Kyle finds himself again as the seasoned veteran leading a squad of fresh talent.

He mentioned, “It’s a pretty young team! I’m the second oldest at 26, with most of the other players around 21 or 22. There are pros to it, such as our ability to play with a lot of energy, making it fun to be on the court. But at the same time cons such as lacking experience where we probably should have it. Still, it’s just like with any team; you try to sharpen your strengths to compensate for your weaknesses.”

Just as every sports team has experienced, during different stages of the pandemic, Kyle now has a jam-packed month of rescheduled matches from earlier in the season. Raision Loimu will be playing 10 games in 16 days in January, with multiple doubleheaders on weekends. This has become a genuine concern for all professional athletes, as the increased frequency of intense gameplay can considerably affect the body’s ability to recover. But as Kyle shared, it is a price he is willing to pay to keep pursuing his career, after not landing a contract until December. Five months after the conclusion of the NVA season.

“It has been really nice to be back on the court and competing again. The team has been great so far, and I’ve been shocked at how welcoming and inviting they’ve been, especially with how hit or miss it can be overseas. Thankfully I’ve got the right mix of personalities and culture with guys who are always down to eat together, hang out and always talk about volleyball together!” Dagostino stated.

So far, his most memorable experiences with the team have been their bowling outings and a team party at Kyle’s apartment. A “party” involving staying up and playing video games all night long. Kyle shared how he has fit in well with the community and how welcomed he feels, even being invited to spend Christmas Day at one of his teammate’s house for the holidays.

Sadly, despite all the fond memories, Kyle is already finding himself at the start of hunting for new contracts for the next season. It is around this time when job prospects begin to circulate for some highly-sought-after professional teams from around the world. Kyle added, saying, “I’m hoping to not stay here with Raision Loimu for a second season, although it’s been great to have a job and be back playing. It’s still my goal to continue to play at a higher level than what Finland has to offer, but we will see what shows up from some of the stronger European Leagues.”

The team is currently sitting in fifth place as they begin the second half of the season, with an overall record of 12-10. Only the top 8 out of 10 total teams qualify for playoffs and the Finnish Championship. As mentioned by Kyle, “I don’t think we will crack into the top three spots, but fourth place is just a few points ahead of us, which is doable before the regular season ends. As long as we stay healthy and stay mentally engaged, we won’t have any issues making that happen.”

Stay connected with Raision Loimu (@raisionloimu)and Kyle Dagostino (@dagoskyl)as they make their push to the Finnish Championships by giving him a follow on Instagram. Interested fans can also find out more about the clubs history by checking out their team website by clicking the link below. The NVA and Southern Exposure wish Kyle and his team the best of luck this season and can’t wait to have him back competing for the 2022 Championships this summer!