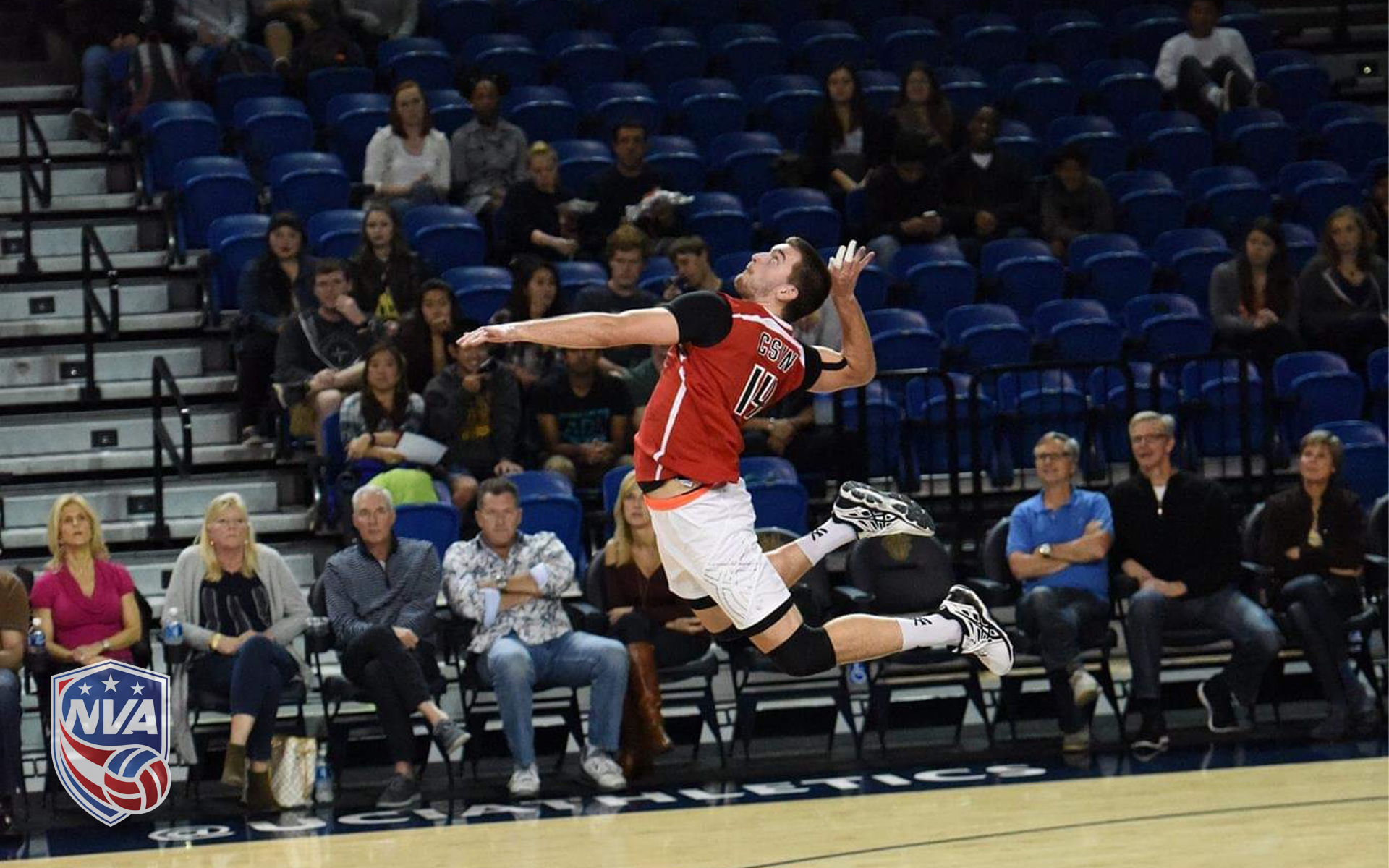 Hailing from Boca Raton, Florida, Southern Exposure’s Jakub Ciesla has had a prolific volleyball career thus far as one of the Golden States’ strongest players to grace NCAA Division I. After being a heavy contender with Cal State Northridge in the Mountain Pacific Sports Federation, Jakub has come to the NVA. Still bringing down the competition with a shotgun swing, crisp platform reception, and shovel digs left and right.

As a first-generation American son of two Polish parents, Bozena and Rafal Ciesla, Jakub has had the rare experience of having grown up watching two of the world’s best men’s national team programs, both Team Poland and Team USA. The two teams are currently ranked 2nd (USA) and 3rd (Poland) in the FIVB. They have inspired the next generations of volleyball players, as evidenced by Ciesla’s favorite player, Polish opposite Bartosz Kurek.

His excellence on the court is from his dual nation’s volleyball upbringing and from being raised by two parents in sports education with his parents attending the Academy of Physical Education in Katowice, Poland. Jakub was a sports prodigy from a young age, seamlessly competing in three separate team seasons. In high school, Jakub was a first-team all-county outside hitter/middle blocker and starter for the soccer team. He also competed as a high-jumper and hurdler, just like his father, who competed for the Polish National Track & Field team. But in the end, Volleyball became his number one passion and has been the driving catalyst for his life ever since.

“Volleyball allowed me to grow as a person, meet new people and got me to where I am today. By being able to play D1 in college, I pursued a college major that now has become my career and provides for me financially. It’s been a great bridge for me to get to know people from all over the country and travel to numerous places.” – Jakub Ciesla.

Having Jakub playing for Southern Exposure and the NVA has genuinely been a mutually beneficial experience, both for Jakub’s career and for the NVA’s push to establish themselves as the predominant professional league in the United States. On top of growing up watching the Polish National Team, Jakub was also an avid follower of the polish club Jastrzebski Wegiel, competing in the Plus Liga and the CEV Champions League. Poland’s Plus Liga shares the same caliber of competition as the Russian and Italian leagues, which are the equivalent of the NBA of Volleyball. Jakub brings with him an awareness of what is needed for the NVA to reach the same level of notoriety and prestige, committing himself to the same work ethic as athletes in the Champions League.

“I love the mission that the NVA is on, bringing elite level volleyball players with the professional infrastructure to make it viable in the states. Excited to be a part of the movement and continue to grow the game in the US.!” – Jakub Ciesla.

You can expect to see and hear a lot more from Ciesla this 2021 season as Southern Exposure is ready to make an impressive run for the finals this year. You can follow Jakub on Instagram (@jakubciesla) to see him dabble in some of his other interests with the outdoors, camping, and hiking. Also, make sure to follow the NVA (@nvausa) and Southern Exposure (@southernexposurenva) to get weekly media updates. As always, you can also catch Jakub in action this season with live streams and even replays from the NVA 2020 Championship on our Youtube page. Don’t miss out on all the exciting news and coverage to come from this new season!